This research was featured in Stuff.co.nz in 4 February 2021. Read the write up here.

Last year, Perceptive surveyed 1000 New Zealanders about their Christmas spending intentions. Did we plan to spend less or more? What would we buy? Would we purchase on credit or debit?

Today, we delve into part two of Perceptive’s Christmas spending study. Harnessing Worldline data—the largest transactional data set it in New Zealand—Perceptive is exploring how Kiwis truly spent over Christmas. This data was captured over twelve weeks from the end of October to the beginning of January.

As part of this study, Perceptive also ran a second post-Christmas survey with 1000 New Zealanders to see the difference between their reported data and actual transactions.

“What’s interesting in this data is the difference between consumer mindset and behaviour,” says Daniel Shaw, Managing Director at Perceptive. “While Covid-19 has ingrained a mindset to be conservative and cautious with our finances, our actual behaviour tells another story.”

Please note: These figures reflect general market trends and should not be taken as a proxy for Worldline's market share or company earnings.

Did we spend less on Christmas than last year?

Last December, 30% of New Zealanders intended to spend less for Christmas with 48% citing financial hardship as the main reason. Over half also stated that Covid-19 was one of the reasons for cutting down on their Christmas spending. In Perceptive’s post-Christmas survey, the proportion of Kiwis claiming they spent less jumped to 37%.

However, Worldline data from the 2020 Christmas season shows an average 6% growth in retail Christmas spending overall.

For comparison, in 2018 and 2019 New Zealand only saw 4.1% and 4.6% growth in Christmas spending, respectively. The increase of 6% in 2020 shows that despite Covid-19 and a conservative spending mindset, most of us spent similar amounts to previous years.

“This is an interesting attitudinal versus behavioural dynamic where customers think one way but act in another,” says Daniel. “This is why it’s important to have both attitudinal and behavioural data. Having both sets allows us to better and more accurately predict trends and consumer behaviour.”

Liquor, sporting and camping goods, and homewares won out this Christmas

Despite a turbulent year, some brands have done particularly well at enticing people to spend—particularly those in categories that have seen major growth as a result of Covid-19. Christmas 2020 saw this trend continue with significant growth in liquor (16%), sporting and camping goods (15%), and homewares (14%).

“The ongoing success of these categories shows that Covid-19 is still impacting purchasing choices, from limiting holidaying to within New Zealand to improving our living spaces to better meet our needs,” says Daniel.

Are Aucklanders feeling the pinch?

Not so much. Despite 34% of Aucklanders saying they intended to spend less for Christmas, Auckland remained on par with the 6% average growth in spending for all of New Zealand. Auckland’s growth was also consistent with other metro areas, such as Wellington and Christchurch.

In fact, all regions saw an increase in spending except Otago, which experienced a 5% drop from 2019.

In June 2020, Otago saw a 27% drop in retail sales values after the country lockdown (compared to the overall 15% drop nationally). And while Worldline's spending data over Christmas shows other regions have recovered, it’s clear that Otago is still suffering from the dual loss of its tourism and tertiary education industries, which were hit particularly hard by Covid-19.

Are alternative payment methods on the rise?

In December a significant number Kiwis planned to spend more for Christmas by using alternative payment methods, such as credit card and layby.

Credit card spending is up, debit spending down

“The increase in Toys and Game Retailing shows that Kiwis will buy Christmas gifts for their kids regardless of whether they can afford it or not,” says Daniel. “This matches up with our post-Christmas survey that saw Kiwis with families reporting they spent more on credit, particular those with preschool-aged children.”

Curiously, Perceptive’s pre-Christmas survey saw many young Kiwis (18 to 34 years) and living in shared accommodation intending to spend more with alternative payment methods. However, in reality, families spent more on credit—despite the pre-Christmas survey indicating that many didn’t intend to.

“This difference between intent and actual behaviour shows the power of effective Christmas promotions and marketing, which encourages us to spend more once we’re in a store,” says Daniel.

Meanwhile, the rise of Sport and Camping Equipment correlates with the rise in domestic tourism—predicted to jump 118% this January—and the number of Kiwis in need of camping, caravanning and summer activity equipment, which are often more expensive purchases.

The rise in buying liquor on credit also matches the increase in alcohol purchasing in 2020 where liquor stores reported an 1800% spike in sales before the March Level 4 lockdown.

Credit for Christmas is always common, but now it’s credit for everything.

During the March lockdown, Kiwis paid off $1 billion of credit card debt, which in turn freed up more money they could borrow on credit. The consistently high spend on credit cards over the Christmas period indicates this ‘revenge spending’ behaviour where Kiwis who have cleared their debt buy more on their credit card as a result.

To better understand consumer the motivations behind this shift, we ran a post-Christmas survey and asked New Zealanders who claimed they spent more on credit card over Christmas what their reasoning was. Of this group:

Before Christmas, many of us claimed we’d do our gift shopping earlier. And some of us did. When Perceptive compared the 2019 and 2020 spending data, both years saw a slight peak in November around Black Friday, a drop off in spending at the start of December, then a surge in the last few weeks leading into Christmas.

Yet despite our ambitions to be more organised, most of us were less organised than we were in 2019. In fact, more Kiwis did their shopping closer to Christmas in 2020. 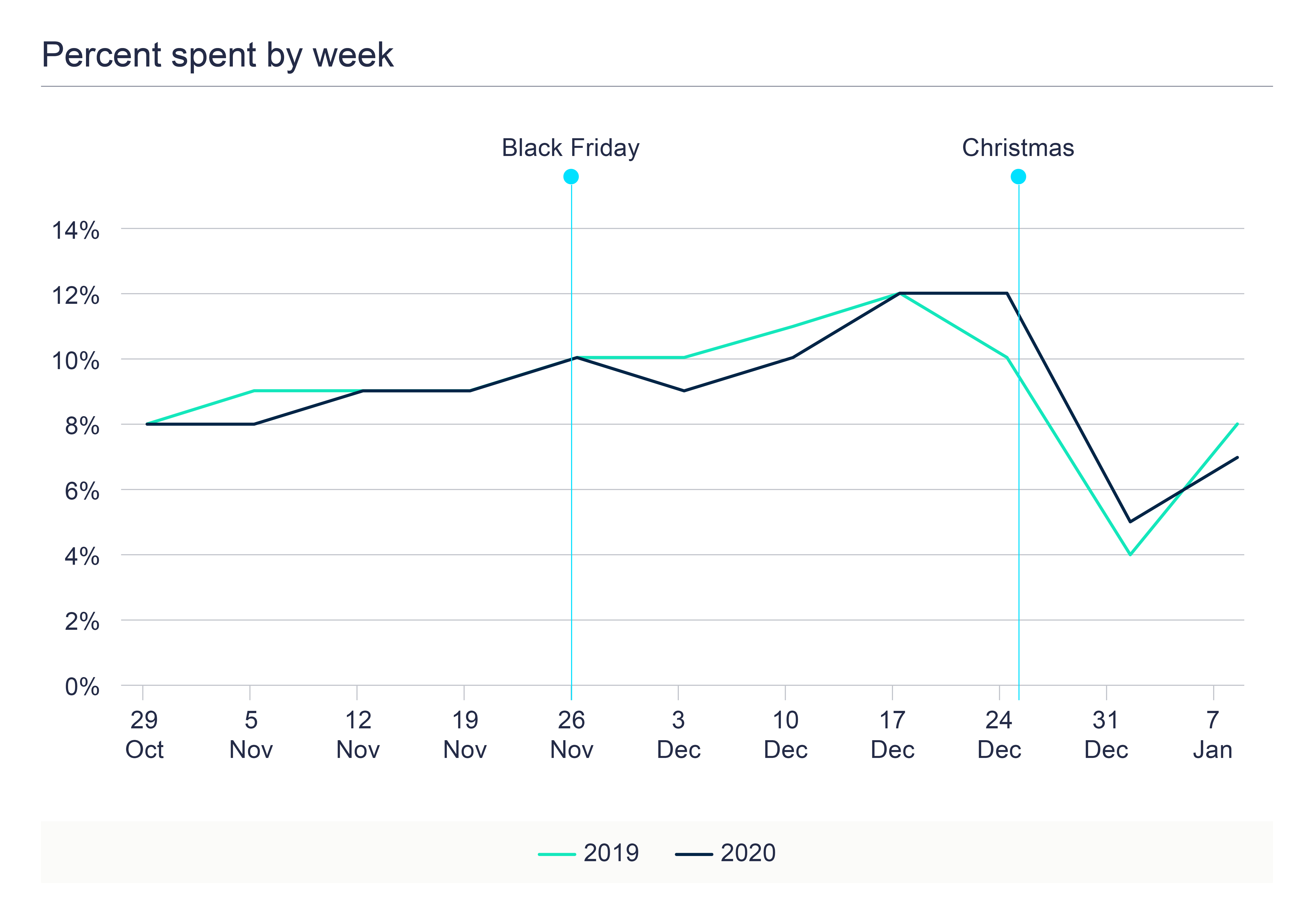 Our post-Christmas survey also found that more people started their shopping later than they thought they would.

“This is a classic example of cognitive bias where we overestimate our abilities or report what we’d like to be true, rather than what actually is,” says Daniel.

“Some attitudes don’t always translate into action and Worldline's transactional data shows us this gap between claimed behaviour and actual behaviour. Once we know the gap exists, the next step is to understand the relationship between the data and how to leverage it.”

Consumers are confident, despite believing otherwise

While Covid still weighs on people’s minds and affects what we buy, it is not affecting how much we spend. The differences in our reported data and actual transactional data shows that New Zealand consumers are confidently spending—and spending the same amount as previous years—despite the gap between believing we need to spend conservatively and actual behaviour.

Perceptive's post-Christmas survey collected n=1006 responses from New Zealanders in the week starting 18 January 2021 and used a nationwide sampling framework. The results were then weighted to Statistics New Zealand census gender, age and location to give a representative sample of the population.

5 upcoming workplace trends and how we can prepare ourselves

How to implement employee feedback and engage your talent